105th anniversary of the Balfour Declaration Today, 2 November 2022, marks 105 years since the Balfour Declaration was issued. On this occasion, the Palestinian Mission to the UK calls for accountability.

The declaration was the height of imperial arrogance and disregard for the collective political rights of millions of Palestinians, making the people of Palestine disenfranchised and stateless in their own homeland. The Palestinian right to self-determination must be upheld. For that, and much more, the British Government is accountable.

The Balfour Declaration has been nothing but a disaster for the Palestinian people, and for peace. It has caused – and still causes to this day – ethnic cleansing, apartheid and countless killings, 105 years after it was issued.

While there is nearly population parity, Palestinians suffer daily systematic discrimination. In the occupied West Bank and Gaza Strip, some 22 percent of historical Palestine, the local population lives under military rule that operates by imprisonment without charge, home demolitions, unlawful killings, population transfer, and a myriad other assaults on the people’s lives, livelihoods and dignity.

When will the UK apologise and make amends?

We call on the UK to play a constructive role in efforts to secure a lasting and just peace based on UN resolutions and international law – the very same law that the UK is proud to uphold in Ukraine.

How can the UK begin to make amends? Recognise the State of Palestine on 1967 borders, ban all trade in goods and services with Israel’s illegal settlements in occupied territory, penalise British companies which work there, and affirm the UK’s support for the right of return of Palestinian refugees.

A hundred and five years on, the UK must acknowledge its historic responsibilities for the dispossession and continuing suffering of the Palestinian people, and work to restore Palestinian rights. The time for double standards is past. 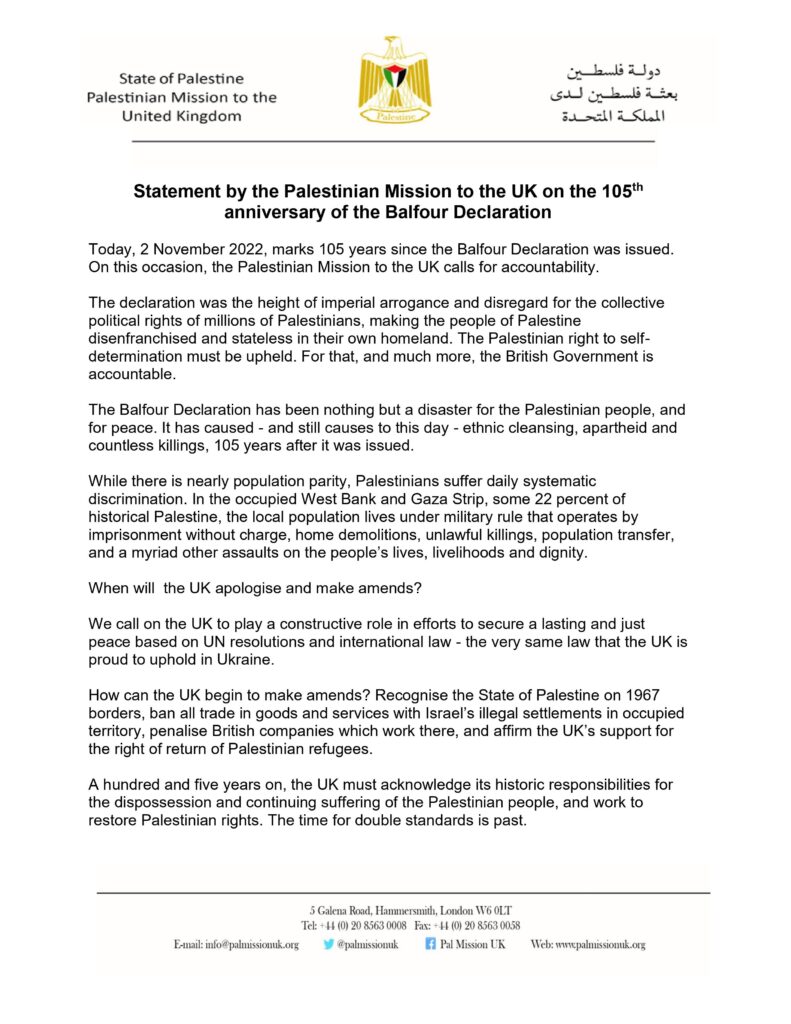