The Palestinian mission’s main objective is to advance the Palestinian – British Bilateral relationship and strength ties with UK government and people. We believe that through international support, recognition, and advocacy we can help facilitate peace in the region.

The mission seeks to foster constructive and positive bilateral relations between the UK and the government and people of Palestine, and to raise awareness in the UK of Palestinian history, culture, society and political realities.

The UK has historically played and still plays a special role in Palestine. We are keen to continue to deepen our ties in all fields, whether in trade and commerce, aid and development cooperation, cultural and education spheres or in political and diplomatic initiatives.

As a former British Mandate, a just resolution to the issue of Palestine is in the interests of the UK, and we look forward to engaging with our British partners, friends and supporters to achieve this end.

The State of Palestine is committed to a resolution of the question of Palestinian in line with international law, legitimacy and consensus.

Such a resolution involves:

In light of our commitment to international law, we consider all activities in occupied territory undertaken by the occupying power — including the colonial settlements in occupied East Jerusalem and the West Bank, and the siege of the Gaza Strip — to be illegal. They present the main obstacles to peace.

We hope that our diplomatic efforts in the UK will ultimately result in British recognition of the State of Palestine, as voted for by the UK parliament in 2014. We look forward to the full application of international law and resolutions, and the continuing upgrading of UK-Palestine relations in all areas.

The Palestinian Mission to the United Kingdom has been functioning since the early 1970s. In 1993, it was recognised by Her Majesty’s Government as the Palestinian General Delegation. In 2011, it was upgraded into a representative mission. This growing recognition of official Palestinian representation is a mark of progress in the Palestinian quest for independence, statehood, self-determination and the return of Palestinian refugees. 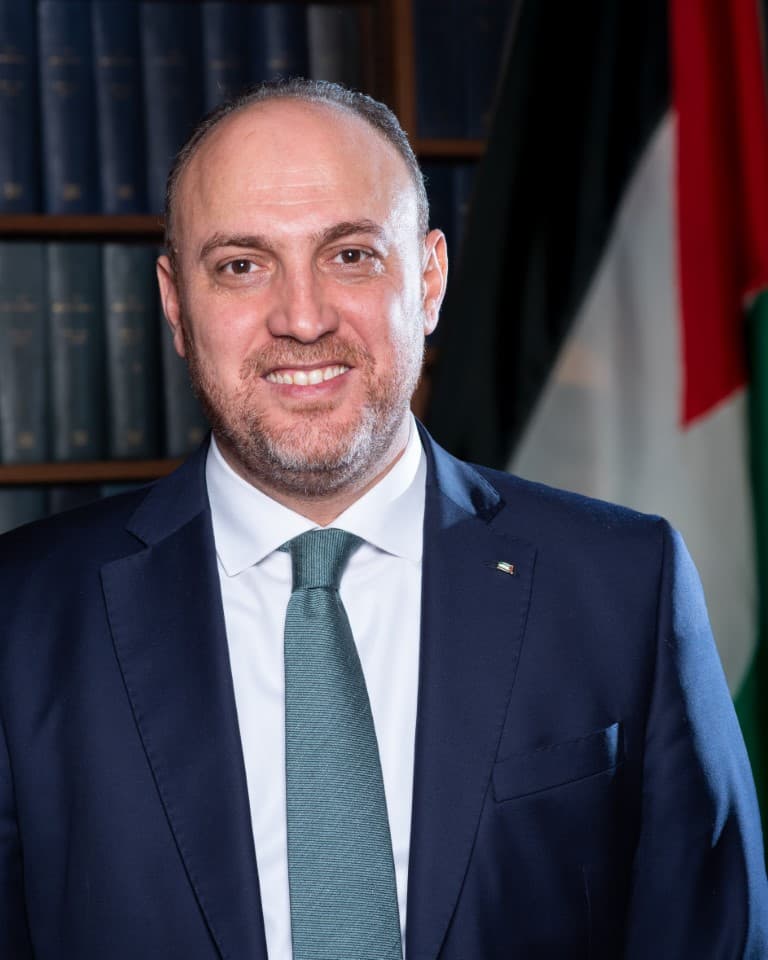 H.E. Dr Husam Zomlot
Head of The Palestine Mission To The United Kingdom

Ambassador Husam S. Zomlot is the Head of the Palestinian Mission to the United Kingdom.

Dr Zomlot’s previous official roles include serving as ambassador–at-large for the Palestinian Presidency, Director of the Fatah Foreign Relations Commission and First Counsellor at the Palestinian Mission to the United Kingdom.

Dr Zomlot held several academic positions in the past. He worked as a professor of Public Policy at Birzeit University, where he co-founded and chaired the Birzeit School of Government. He held a number of teaching and research positions at Harvard University and the University of London. His professional experience includes working as an economist at the United Nations and economic researcher with the London School of Economics and the Palestine Policy Research Institute.

Dr Zomlot holds a PhD in economics from the University of London. He is married and has two children.

The consular department is responsible for issuing formal documents such as passports, power of attorney and legalisation documents for use in Palestine. The department has jurisdiction over the United Kingdom: England, Wales, Scotland and Northern Ireland.

The political department seeks to foster constructive and positive bilateral relations between the UK and the government and people of Palestine, and to raise awareness in the UK of Palestinian history, culture, society and political realities. The department works to deepen relations with Her Majesty’s government, parliament, political parties, diplomatic corps and partner organisations in the UK.

The trade department aims to support British efforts within the Department for International Trade alongside the Palestine Liberation Organisation (PLO) to ensure the success of the United Kingdom’s trade relationship with the Palestinian Authority of the West Bank and the Gaza Strip.

The media department provides information on the situation in Palestine and the policies of the Palestinian Authority. The department also provides a wide range of media contacts and deals with press releases both in Palestine and the UK. It organises media appointments, to ensure balanced coverage of the Israeli-Palestinian conflict and monitors daily news bulletins and print news outlets.

The cultural section seeks to impart a deeper and richer understanding of Palestinian art, heritage, history and traditions. The section helps organise and publicise cultural events in the UK. We believe that it is through cultural discourse that we might better present and represent the heritage of the indigenous people of Palestine.

Work at the Palestinian mission in London

Information on current vacancies and how to apply.

How to find Us

The mission is located on Galena Road