A ceasefire was agreed on 14 November between Israel and the Islamic Jihad group in Gaza after the assassination of an Islamic Jihad leader and his wife at their home in Gaza and a subsequent 48-hour spike in violence across the Israel-Gaza boundary.

Thirty-four Palestinians were killed in Israeli strikes during this period, among them eight children. No Israelis died.

The ceasefire came with Egyptian mediation, according to Islamic Jihad spokesman Musab al-Berim.

The violence, which saw militants lobby rockets into Israel, was sparked by the 12 November assassination-by-missile of Baha Abu al-Ata and his wife, Asma, in their home. 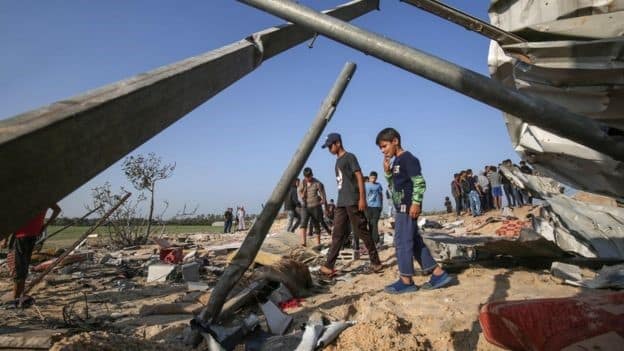 The assassination in Gaza came almost simultaneously as the attempted assassination of another Islamic Jihad leader, Akram al-Ajouri, in Damascus.

That attack caused the death of al-Ajouri’s son Muath, and a granddaughter, Batoul.

The deadliest single incident in the 48 hours of bombardment occurred soon before the truce took effect on 14 November. Eight people from the al-Sawarka family – five of them children – were killed and 13 injured when Israel fired four missiles at homes in central Gaza.

Nearly half that fatalities in Gaza were civilians, including eight children and three women.

The US has shifted its position on the status of Israel's settlements in the occupied West Bank, including East Jerusalem.On 18 November, Mike Pompeo, the US Secretary of State, announced that Washington no longer considered settlements "inconsistent with international

EnumerationA ceasefire was agreed on 14 November between Israel and the Islamic Jihad group in Gaza after the assassination of an Islamic Jihad leader and his wife at their home in Gaza and a subsequent 48-hour spike in violence across the Israel-Gaza boundary.

Israeli police on 3 November arrested Fadi al-Hidmi, the Palestinian Authority's minister for Jerusalem Affairs. It is the third time al-Hidmi has been arrested since he took office last April and it marks another violation of Palestinian rights in occupied East

Ambassador of the Palestinian Mission to the UK, H.E. Dr Husam Zomlot stated:“Today we commemorate 102 year of the Balfour Declaration, which negated the political rights of the people of Palestine. It had catastrophic consequences that are yet to be redressed.

Nabil Anani, Noura Erakat, Isabella Hammad, Andrew Ross and Samuel Wilder took away the prizes at the seventh Middle East Monitor Palestine Book Awards on 1 November.The awards have been taking place annually since 2012 and honours authors who have made significant

H.E. Dr. Husam Zomlot, the Palestinian ambassador to the UK, on 20 September visited the All Saints Catholic School in Dagenham, London. The visit came as part of the Rivers of the World Project, in which students at All Saints had been studying rivers in Jericho,

Israeli PM Benjamin Netanyahu, leader of the right-wing Likud party, on 15 September announced his intention to annex the Jordan Valley and the northern Dead Sea, if elected again. Netanyahu said he had received a green light from the US administration of Donald